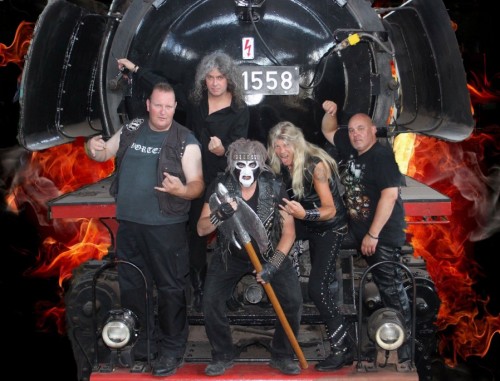 Since 1979 Heavy Metal band Vortex is working its way up in this world, playing in a traditional old-school style, known as NWOBHM (New wave of British Heavy Metal). In these years Vortex line-ups produced five demo-tapes, had their share of a few songs in two compilation albums, “Holland Heavy Metal” part II (1982) and “Dutch Steel” (1984), and they themselves let two albums of their own see the light, called “Metal Bats” (1985) and “Open the Gate” (1986).
The title track of the last album “Open the Gate” was turned into a real exciting video, which was broadcasted on Sky Channel and later on MTV. Part of it was also used in the famous BBC music-show called Never mind the Buzzcocks. As a live cult-band Vortex always had great successes and was often one of the main attractions on festivals, where the fans highly appreciated their impressing and entertaining shows on the stages. Well you can say they still do, and while most of their gigs were in the Netherlands and Germany, their musical products and videos are well known and well sold far away in other European countries, the US of A and South America.
While it looked like Vortex did their last feat in 1990, there has always been some kind of ongoing interest in everything about the band. Every opportunity was a chance to do reunion gigs and for lots of Metal fans there has never been a goodbye concert or other kind of ending the story of Vortex, one of the last of Dutch Metal bands.
At one of the restarts, like a gig back in 1997 it showed everyone that Vortex was more popular then ever. And every demo, recording, video, album (especially the first LP’s) by now has turned into a collector’s item all the way. Articles about the band, including the interviews were published in several Hardrock and Heavy Metal magazines in more than one country. April of 1998, “the best of”- cd “The Dawning” is published as a re-opening of the Metal Gates, which is a hard fact by then.
This millennium brings almost every other year a new and always desirable product of Vortex’ making on the Metal market. The band seems to be unstoppable, in gigs as well as recordings.
Then in 2014 Vortex celebrates their 35th birthday, with a new album, a live dvd (recorded in Groningen rock temple VERA), a re-release of older material, and a real Metal tour through parts of Europe. After that there is a brief silence, before new activity starts. This is due to illness, cardiac operation and revalidation of guitarist Martjo.
Off 2016 Vortex is more than ready to turn rock into metal again and makes a glorious restart in studio’s and on the stages everywhere.
Summer of 2017 a documentary is made of the making of the song and video “Open the Gate”, and this ‘rockumentary’ is nominated several times on festivals everywhere, for being the best documentary or short movie. In the meantime, while band-members are being aware that Vortex as a band (with a few different line-ups) exists 40 years in the year of 2019, for a short time there’ll be no new releases what so ever. This is because several labels and interested companies, have plans to release the whole artwork of the band, in that glorious year.
That memorial year of 2019 will know many fine Vortex products, like the tape, with the pre-production of the album “Open the Gate” (the pre is of 1985). Release of this tape was in 2018 already by US label Postmortem Apocalypse.
Also the first four demo-tapes (of 1982- 1984) with the pre-production of the album “Open the Gate” is released as a 2-cd on PT78 Records, at 7 February 2019. And last but not least, a new album will see the light in September 2019. Both will be released by PT78 Records.
After that The Bats will embark on a brand-new tour! Hell yeah! 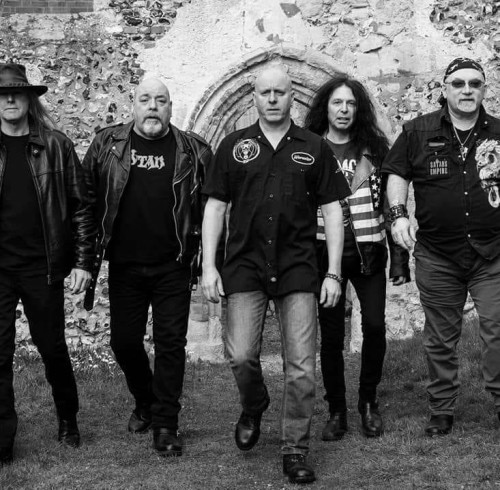 Satan’s Empire originally from Dundee Scotland recorded ‘Soldiers Of War” on the Leadweight Album for Neat Records. The band moved to London in1981 and have now reformed with the original London Line up after 30 years. The current line up Consists of Paul Lewis Guitar, Alex Mcritchie Guitar, Wayne Hudson on Bass, Magpie on Drums and Derek Lyon on vocals. The band will be in the studio in November 2016 to record their debut album and UK and European dates are under way for 2017.

Given great incentive by their work together in Belgium’s legendary Heavy Metal band Ostrogoth, axemen Dario Frodo, Stripe and Tom Tee found themselves overwhelmed by massive amounts of inspiration for new material, much of which proved to lie too much outside the boundaries of what they could rightly realize with Ostrogoth. Therefore, they decided to found a brand new formation through which to channel all these new ideas. With the addition of classically trailed batterist Louis Van Der Linden to the fold, the search was open for a powerful vocalist with a wide range and striking stage presence, which they found in seasoned Dutch singer David Marcelis (Lord Volture, Black Knight,…).

With the line-up complete, the band put the finishing touches on their self-titled debut album, which was released October 5th 2018. Touring and gigging in promotion for the new record commenced immediately, and saw the band playing dates across Germany, Spain, the Czech Republic, Holland and Belgium, where Thorium shared the stage with acts such as The Three Tremors, Q5, Witch Cross, and many more.

Influenced by and incorporating elements of all the classic styles of Metal from the past four decades, such as NWOBHM, Power Metal, Progressive Metal, Speed Metal, Bay Area Thrash and of course classic Heavy Metal, Thorium’s members set themselves no boundaries and seek to deliver music that is heavy, melodic, virtuosic, catchy and conceptual.

KITCHENETTE & ONE NIGHT ONLY