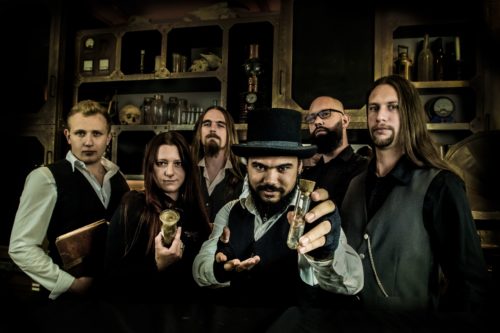 Ball Noir–bio 2018-a feast of wings, candles, clocks and costumesLike obsessed alchemistsBALL NOIRmixesthe worldsof programming and electric devices withmedieval and classical instruments.Inspired by their heroes from Anathema,My DyingBrideand Qntalthey write medieval metal, witha greed for haunting melodies, dark fantasiesandsmashing heartbeats.EveryBALL NOIRlive show gives a glimpse into their laboratory: a feast ofwings, candles, clocks and costumes.BioBALL NOIR is a band of experienced musicians that had already earned their degrees in thebalfolk-and the metal scene before Ball Noir started. They come from bands like the doom-metalband Eria d’Or (warming up for Anathema, Tivoli 2001), the balfolkband Orfeo (supportingEstampie, W2 2008) and Kelten zonder Grenzen (supporting Qntal, P60 2015) among others.BALL NOIR first performed live on the Summer Darkness festival in Utrecht in 2010. After that alot of live shows followed, among them in venues like Tivoli (Utrecht), Melkweg (Amsterdam),LVC (Leiden) and on festivals like Castlefest, Summer Darkness and as a headliner onFolkwoods. BALL NOIR released their first album ‘Bitter Dreams’ in 2012 and the second album”Lost Serenades” in august 2017. 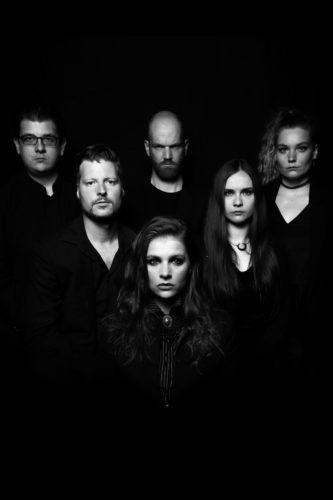 This is Scarlet Stories, a Dutch band from Tilburg, who released two EP’s since 2012 and became known for their unique dark progressive music with an eclectic range of musical infuences, such as heavy metal, ambient and doom. In September 2019 they released their debut-album ‘Necrologies’ (Necrologies – obituary/list of deaths).

​Scarlet Stories was support act for Antimatter, Danny Cavanagh (Anathema), Gus G & Marty Friedman, Stream of Passion, KLONE and more. In 2013 they released their acoustic EP ‘Scarlet Stories’, which received great reviews from the public and press. Also, with their band EP ‘Resurrection’ Scarlet Stories showed they were ready to conquer bigger stages.

​‘Necrologies’
Scarlet Stories’ first full-length was made possible by all crowdfunding supporters via the platform Voordekunst. The band was supported by KunstLoc Brabant and received funding from Provincie Noord- Brabant and Prins Bernhard Cultuurfonds during their crowdfunding campaign.

‘”Necrologies” is a tribute to all animals and humans who suffered or died by the greed of others. It acknowledges their battle, struggle or innocence. The songs tell stories about their suffering or how they died. Our stories show the dark side of humanity and are soundtracks to emotions, injustice, murder, but also beauty and innocence. These tales are brought with a dramatic live performance and dynamics. One moment fragile and quiet, and the other moment intense and raw.

A DATE WITH MADONNA